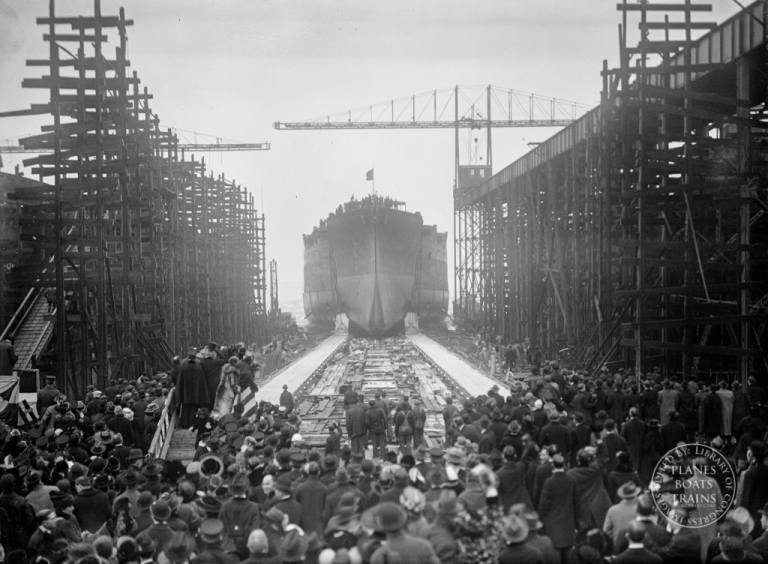 USS Mississippi (BB-41/AG-128), the second of three members of the New Mexico class, was the third ship of the United States Navy named in honor of the 20th state. The ship was built at the Newport News Shipbuilding Company of Newport News, Virginia, from her keel laying in April 1915, her launching in January 1917, and her commissioning in December that year. She was armed with a battery of twelve 14-inch (356 mm) guns in four three-gun turrets, and was protected by heavy armor plate, with her main belt armor being 13.5 inches (343 mm) thick.
The ship remained in North American waters during World War I, conducting training exercises to work up the crew. Throughout the 1920s and 1930s, the ship served in the Pacific Fleet. In May 1941, with World War II and the Battle of the Atlantic raging, Mississippi and her two sister ships were transferred to the Atlantic Fleet to help protect American shipping through the Neutrality Patrols. Two days after the Japanese attack on Pearl Harbor, Mississippi departed the Atlantic to return to the Pacific Fleet; throughout her participation in World War II, she supported amphibious operations in the Pacific. She shelled Japanese forces during the Gilbert and Marshall Islands and the Philippines campaigns and the invasions of Peleliu and Okinawa. The Japanese fleet attacked American forces during the Philippines campaign, and in the ensuing Battle of Leyte Gulf, Mississippi took part in the Battle of Surigao Strait, the last battleship engagement in history.
After the war, Mississippi was converted into a gunnery training ship, and was also used to test new weapons systems. These included the RIM-2 Terrier missile and the AUM-N-2 Petrel missile. She was eventually decommissioned in 1956 and sold to ship breakers in November that year.
Mississippi was 624 feet (190 m) long overall and had a beam of 97 ft 5 in (29.69 m) and a draft of 30 ft (9.1 m). She displaced 32,000 long tons (33,000 t) as designed and up to 33,000 long tons (34,000 t) at full combat load. The ship was powered by four-shaft Curtis turbines and nine oil-fired Babcock & Wilcox boilers rated at 32,000 shaft horsepower (24,000 kW), generating a top speed of 21 knots (39 km/h; 24 mph). The ship had a cruising range of 8,000 nautical miles (15,000 km; 9,200 mi) at a speed of 10 kn (19 km/h; 12 mph). Her crew numbered 1,081 officers and enlisted men. As built, she was fitted with two lattice masts with spotting tops for the main gun battery. The main armored belt was 8–13.5 in (203–343 mm) thick, while the main armored deck was up to 3.5 in (89 mm) thick. The main battery gun turrets had 18 in (457 mm) thick faces on 13 in (330 mm) barbettes. The conning tower had 16 in (406 mm) thick sides.
The ship was armed with a main battery of twelve 14-inch (356 mm)/50 caliber guns in four, three-gun turrets on the centerline, placed in two superfiring pairs forward and aft of the superstructure. Unlike earlier American battleships with triple turrets, these mounts were true three-gun barrels, in that each barrel could elevate independently. The secondary battery consisted of fourteen 5-inch (127 mm)/51 caliber guns mounted in individual casemates clustered in the superstructure amidships. Initially, the ship was to have been fitted with twenty-two of the guns, but experiences in the North Sea during World War I demonstrated that the additional guns, which would have been placed in the hull, would have been unusable in anything but calm seas. As a result, the casemates were plated over to prevent flooding. The secondary battery was augmented with four 3-inch (76 mm)/50 caliber guns. In addition to her gun armament, Mississippi was also fitted with two 21-inch (530 mm) torpedo tubes, mounted submerged in the hull, one on each broadside.

Mississippi was heavily modernized in the early 1930s. Her original turbines were replaced with new geared models manufactured by Westinghouse, and she received six express boilers designed by the Bureau of Engineering. This improved her performance to a top speed of 22 knots (41 km/h; 25 mph) from 40,000 shaft horsepower (30,000 kW). Her armament was also revised, with the main battery turrets being modified to allow elevation to 30 degrees, greatly extending the range of the guns. Two of the 5-inch guns were removed, and eight 5-inch/25 caliber anti-aircraft guns were installed. She received an additional 2-inch (51 mm) armored deck, and her underwater protection was improved. Both lattice masts were removed; a heavy tower bridge was built in place of the fore mast, and a light pole mast was erected in place of the main mast. These alterations greatly increased her displacement, to 33,420 long tons (33,960 t) standard and 36,157 long tons (36,737 t) full load. Her crew increased significantly, to 1,443.
In early 1945, while under repair for combat damage, Mississippi received a new secondary battery. The old 51-caliber 5-inch guns were removed, and eight more of the 25-caliber anti-aircraft guns were installed, along with thirteen quadruple Bofors 40 mm mounts and forty 20 mm Oerlikon guns.[3] To compensate for the added weight, the ship’s armored conning tower was removed.